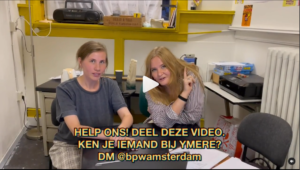 Housing corporation Ymere states that the apartment will be available very soon will be demolished, rebuilt or sold - something that clearly has not happened now that the resident has lived there for five years. In all eleven years, the resident has properly fulfilled his obligations as a resident – the resident does not cause any complaints or nuisance, despite the noise of the complex. However, because the resident resides in the home through a user agreement, there is no right to rent protection built up.

Do you know someone at Ymere?
Do you have any valuable tips?

In July, the resident will receive suddenly the announcement that the resident would have canceled the contract, and that the resident must leave within two months. This was followed by a cancellation from Ymere – now with a term of only one month. Since the conditions in the housing complex have not changed, this comes as a great shock to the resident.

A quick study shows that the entire residential complex is in use, with mainly youth and campus contracts. The complex as a whole will not be renovated or demolished, given that there is still moving in new residents every week. Ymere states that the reason for the eviction is that it wants to rent out the house on a regular basis. But instead of granting the resident (who has lived there for 11! years) housing security, the resident is simply replaced by a new tenant.

The resident has no safety net in the Netherlands, and therefore cannot just go anywhere. Currently the date of eviction on upcoming thursday 15 september, after which the resident with the whole have and keep homeless is becoming. The resident tried twice to contact Ymere, but to no avail. Ymere refuses to talk.

Leave the current resident in the house and offer the resident a fixed rental contract!