The Arnhemmers Stefan and his roommate Alwin are put on the street. Pawn owner Jan Willem van Delft Westerhof, who lives in Sydney, Australia, had verbally confirmed to the two tenants that after a one-year contract they would receive a contract for an indefinite period. However, he recently decided to kick Stefan and his roommate out and go back on his promise. The annual contract has been notified and he now wants the residents to leave the building by August 16.

And the residents don't like that. Certainly not because the building at Steenstraat 91 is available online again for a rent that is 155 euros higher than what the two tenants are now paying. This means that Stefan and Alwin are deprived of their right to housing, so that this slum landlord can fill his pockets extra. BPW and the residents do not accept that they are exchanged for other tenants who will pay more and demand housing security.

Rental rights for the highest bidder

When Stefan and his housemate were told that they had to find a new home within 5 weeks because their annual contract was already being canceled, they asked the owner to clarification. The tenancy rights that the tenants would receive with a contract for an indefinite period of time are reason for him to put them out on the street. “Enorm annoying”, in his own words, but he can't help it, want: “a house with an indefinite lease is very difficult to sell.” However, this pawnbroker does not seem to have any problems with renting out the house for an indefinite period, provided the new residents pay him €155 extra per month, according to a report. the ad that's online again is on a housing rental site. 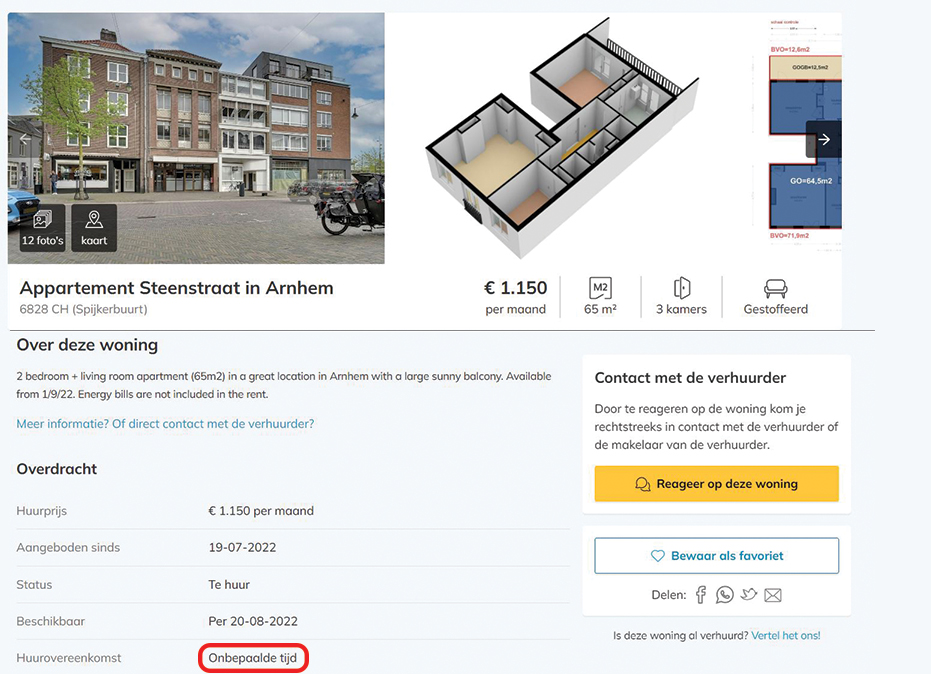 Renting out homes with temporary contracts has been possible since the implementation of the Rental Market Transition Act in 2016. According to Hugo de Jonge, our Minister for Housing, contracts should remain the norm for an indefinite period. Yet this Minister is also fully committed to flexibilization and he wants to retain the Rental Market Transition Act, and he lets tenants suffocate in disenfranchised situations where they dealing with evictions and exploitation. Meanwhile, we see that half of the new contracts in the private rental sector are temporary and are mainly used as a kind of trial period in which the tenant has to behave. Even when tenants do behave well, such as Stefan and Alwin, temporary contracts abused by pawnbrokers such as Jan Willem to circumvent rent rights and implement exorbitant rent increases. It's time this law was brushed aside so that landlords no longer have the power to decide their tenants' tenancy rights. The BPW recently collaborated on a fire letter in which we call on the minister to stop facilitating temporary contracts.

"I can't and won't go anywhere. I refuse to let myself be made homeless so that my landlord can fill his pockets. I demand housing security and a regular rental contract. I am happy to discuss a solution."

Support Stefan and his roommate by sharing this article and our demands. Call on local and national politicians and pawnbroker Jan Willem to stop making tenants homeless and take action to prevent homelessness.

Residents and BPW demands from politicians:

1. Get the Rental Market Flow Act off

2. Bprovide housing security to everyone

If you want more information about this case or if you want to get in touch with Stefan, please contact contact@bondprecairewoonvormen.nl.