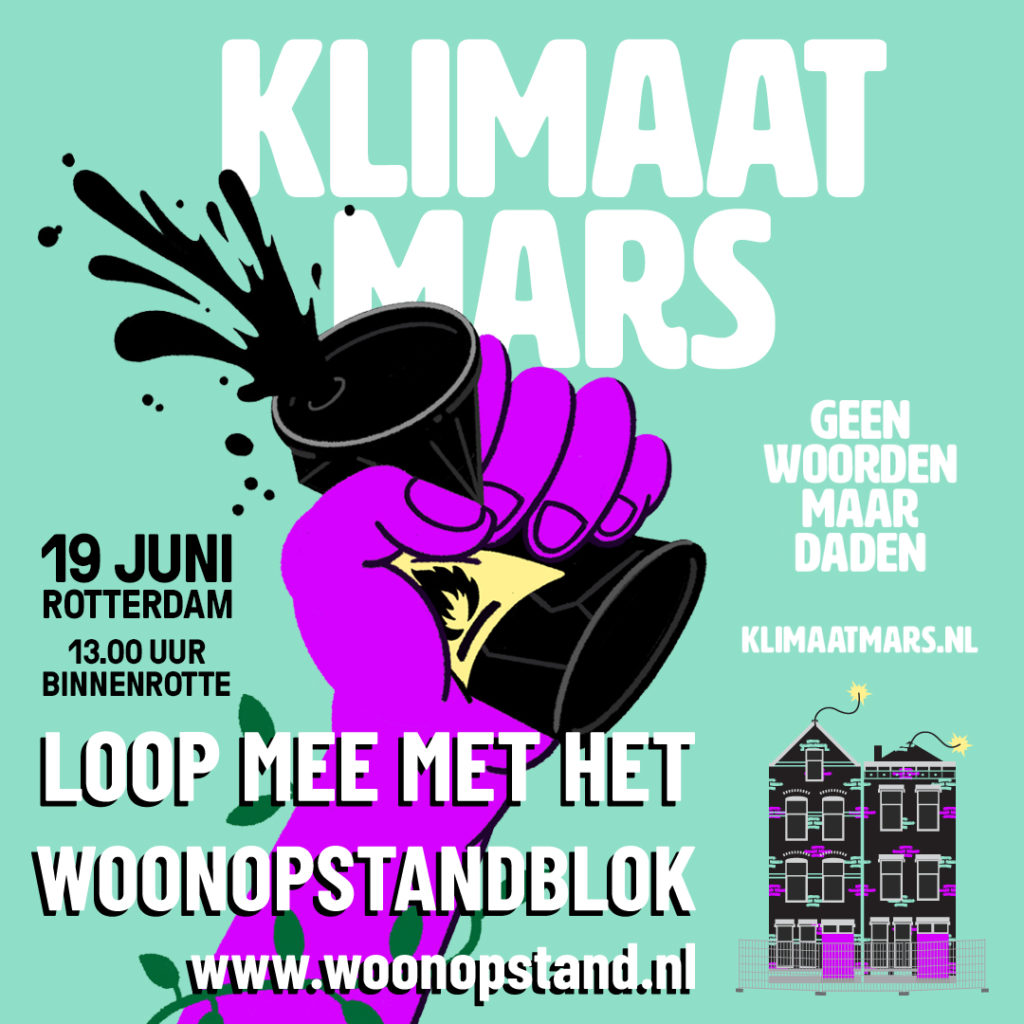 On Sunday, June 19, 2022, tens of thousands of people will take to the streets to demand fair climate policies — exactly 30 years after the first climate conference. While politicians keep talking, we spring into action. Make sure you're there and join the Woonopstandblok! For a radically equal housing and climate policy!

A third of the Netherlands is below sea level. If we can't stop climate change, millions of Dutch people are displaced† The lives of many millions of (future) people are in danger. A safe existence for everyone starts with fair and effective housing and climate policy. After all, no social security without safe living space and no safe living space without a safe living environment. Residential uprising calls on sympathizers to make themselves heard and participate during the Climate March to join the Woonopstandblok on 19 June.

Climate change is making large parts of the world uninhabitable. Too dry—causing famines, such as in India — or just too wet, like in Limburg (but especially far out there), forcing people to leave their homes. The blows mainly fall on people who have the least resources to defend against these dangers. Like the housing crisis, the climate crisis is a symptom of a political and economic system that puts profit above people and nature.

The current system produces extreme inequality, divides populations and places the responsibility on the individual. This is reflected in both climate and housing policy. The right to a safe living environment and the right to move freely in order to find a safe haven are an extension of our right to decent housing. As if it wasn't bad enough that more and more people are fleeing climate change, they are often portrayed in Europe as unwanted aliens, for whom European countries should not bear any responsibility. Furthermore, politicians with nationalistic and racist rhetoric abuse the housing crisis to keep these people from fleeing.

Also in the Netherlands, where investors are buying up land en masse to be able to rent or sell houses at sky-high prices and where hundreds of thousands of homes, shops and office buildings are unnecessarily empty, politicians stir up their supporters with feelings of fear for the foreigner, who is the real cause of our would be a housing shortage. That is not only incorrect, but also life-threatening! A false narrative is being portrayed in which flight is recognized not as a consequence of the disastrous actions of Western economies in the global south, but as a unilateral attack on our prosperity. Instead of tackling complex problems at their root causes, these politicians do not take the housing crisis and the climate crisis (and therefore the fate of future generations in the Netherlands) seriously at all! If we don't take a radically different approach worldwide now, unimaginable suffering and historic refugee flows will be the inevitable result.

Everyone in the Netherlands also feels the consequences of climate change and here too the people with the fewest resources run into problems due to poor housing and climate policy. Due to skyrocketing gas prices, vulnerable groups in poorly insulated homes are now faced with massive poverty. In the meantime, the Minister of Housing, Hugo De Jonge (who is feeling well himself), has let landlords raise the rents as of 1 July and nothing will change the unequal opportunities for citizens to make their homes more sustainable. Residential revolt demands fair housing and climate policy and a fair energy transition, in which not the citizen, but major polluters and large landowners will bear the costs. Tenants must be much better protected and compensated for rising housing costs. Slum landlords must finally be tackled and, now that the landlord levy is finally off the table, we demand that housing associations focus on making the existing housing stock more sustainable, without tenants having to pay for the costs.

'There is no housing security without a good climate policy!'

Demand fair and effective housing and climate policy! Mobilize friends and family and join the Woonopstandblok! After the massive climate protests in Amsterdam, this time the Climate March will take you through Rotterdam — the heart of the fossil fuel industry in the Netherlands. With the police attack on the Residential Rebellion demo last year in Rotterdam, it became clear to many that the government does not take our problems seriously. By actively partnering with other grassroots democratic initiatives and grassroots organizations, we show governments that their efforts to divide us motivate us to build a broad movement for housing and climate justice.

We demand a secure future for everyone – now and in the future. There is no housing security without a radically different climate policy!