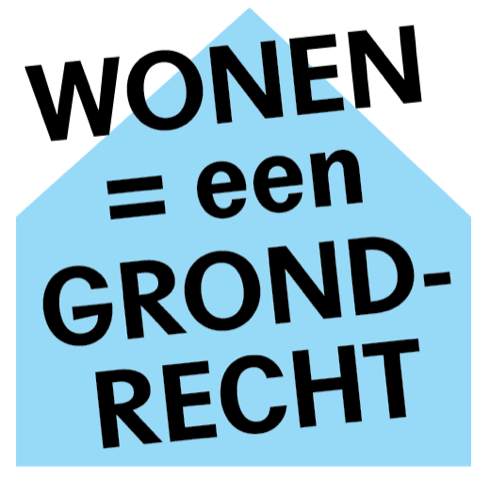 The artist Vita Soul Wilmering tells for BPW Amsterdam her experiences and experiences as an anti-squat resident in herself gentifying Duindorp (The Hague).

Friday 3 December, 20:30. I leave my new home in Duindorp (The Hague) and walk less than 600 meters to the beach. The clouds light up to the rhythm of the lighthouse and a foghorn sounds under the swelling murmur of the waves.

When I walk back from the sea, patriotic hits sing to me. A group of Zwarte Piets dance behind a block of houses and a few boys hang out in a portico. Once I get to my house, I climb the stairs and am shocked to see that my front door is wide open. The first thing that pops into my head is: last night… But then it was an aggressive Saint, who attacked my front door with steel noses or a crowbar, leaving only the handle hanging loosely in the door frame and the floor strewn with splinters. With the door also crumbles my optimism, because after an endless search for a house I am back on the street again.

Less than a week earlier I signed a contract for the porch house based on anti-squat. The house was in bad condition, but for 130 euros a month, as a starting artist with an uncertain income, I had little to complain about. In addition, the anti-squat organization ensured that the door with a swastika on it, which had already been kicked in, was repaired and painted. And with a new coat of paint, a thick board and a few good screws, a week went by during which I became acquainted with the neighborhood.

The kicked in door was of course not the first incident in Duindorp to chase new residents out of their homes. Surprisingly, hardly anything was stolen. The working-class neighborhood has a grim attitude towards newcomers and is known for rioting, vandalism and racism. My kicked in door made me not only angry but also curious about the background of this problem, which after some research turns out to be multiple and especially complex if you delve into the history of Duindorp. In any case, one thing is clear: housing associations try to promote diversity in the neighborhood by applying all kinds of gentrification techniques, but this also increases dissatisfaction among the Duindorp residents. Everywhere is being renovated and surfers and sea lovers are coming with money, but there are less and less affordable housing for the Duindorp residents and their children themselves.

While the sea breeze howls through the cracks of the shattered door, I wait for a repairman to drive my way from Spijkenisse to close the house. He advises me to pack my valuables in advance, because such a wooden plate does not hold back much. The anti-squat organization can only get started on Monday. And what do you take with you if you know that there will be another burglary – and what not? In the end, I can't think of much else than my backup drive and receipts for my business expenses for 2021.

The search for a home continues after that Friday evening. I move my stuff back and the anti-squat organization suggests the option of temporary rental, which offers a little more security than anti-squat. I am ultimately not eligible for this if it turns out that my aggregate income for 2020 is negative on paper.

My tax advisor tells me over the phone that as a starting entrepreneur I do not have to pay tax on the first 9,000 euros profit due to the so-called starters deduction and self-employed deduction. Since my profit in 2020 was just slightly less than that amount, my taxable income ends up a pittance below zero. That amount is then stated on your income statement without any explanation. And that income statement is the one document they all keep asking for, with the zero limit acting as a kind of impassable red zone.

The anti-squat organization is not the only one that has to refuse me a home on the basis of this information. And without parents with permanent jobs, a guarantee becomes difficult. The waiting times for social housing are so long that I should have registered as a teenager, were it not for the fact that it was legally impossible. And so on

Once again the bureaucracy seems to be turning against the citizen. The young entrepreneur is excluded from everything and if you do everything according to the rules, you will end up in a stalemate. Parallel to the increase in flexworkers and self-employed, the liberalization of the housing market continues at a rapid pace

In the meantime, I seize every opportunity that arises for a roof over my head, as in the past two weeks in Duindorp, and I am shamelessly used as a 'tool' for gentrification in a neighborhood that people love to get moving.

In the gray light of the porch lamp, the Spijkenisser screws up my house. Whoever kicked in the door, cynically, his problem was presumably dangerously close to mine: the lack of (affordable) housing.

Friday 3 December, 20:30. I'm leaving my new ones house in Duindorp, The Hagueand walk less than 600 meters to the beach. The clouds light up to the rhythm of the lighthouse and under the swelling rustleOne of the waves sounds a foghorn.

Call! We are getting ready for the Housing Action Days 2023!

The Hofluiders ring the bell for housing security in the Klokkenhof

Stop eviction of Kayleigh from Rotterdam as January 9th!