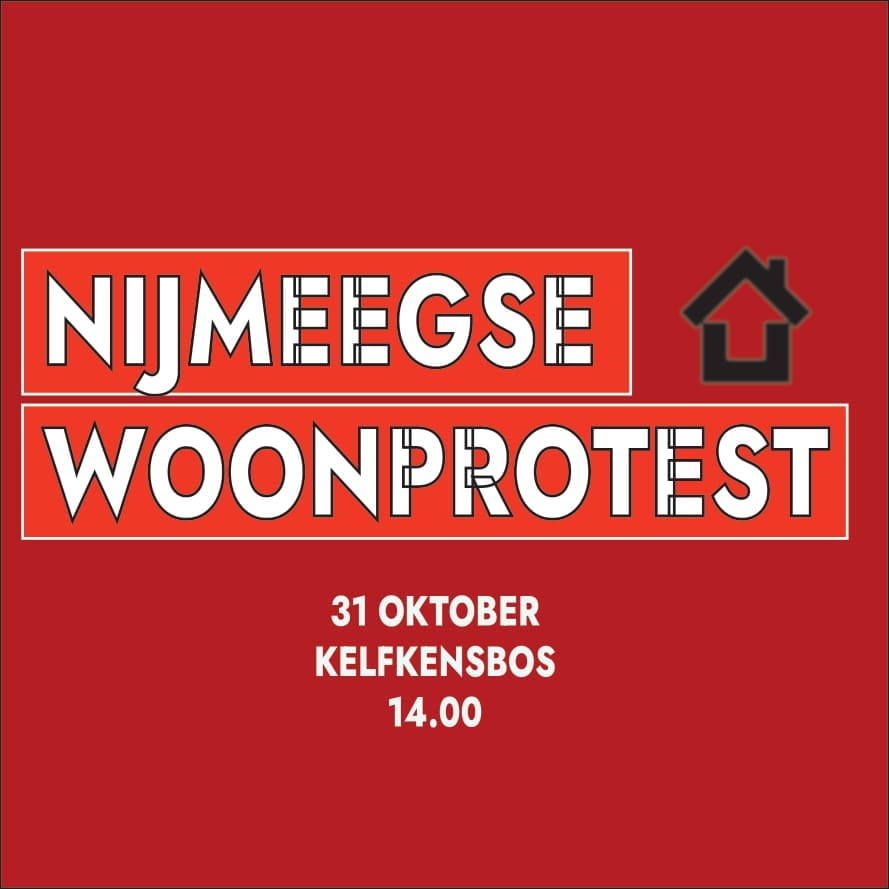 Sunday 31 October there was another demonstration against the absurd Dutch housing policy. This time in Nijmegen: the Nijmegen housing protest.

Speech “How did we get into this housing crisis?”
Nijmegen
October 31, 2021

Beginning of neoliberal politics and damage to (pre-war) public housing

With the introduction of the Housing Act in 1901, whose aim was to build high-quality and affordable housing, a lot of social housing has been built in the Netherlands. The public housing was born with that. It was the government's political task to to provide adequate housing for everyone.

Since the late 1980s, a neoliberal wind by politics and has been deliberately used to the detriment of public housing. Slowly our right of residence made way for the 'housing market'. Houses became a business model. Housing associations were Lubbers and Kok privatized and changed from social institutions to market-driven real estate investors.

After the financial crisis in 2008, the construction production halved and is a lot social rental stock in sale put. Hundreds of thousands of homes were demolished, sold or liberalized Causing waiting lists increased throughout the Netherlands.

More and more homes were sold to national and international investors and investors. Houses were bought up and then rented out at a high price (so-called buy-to-let). Stef Blok (VVD), our then Minister of Housing, went real estate fairs off to putting affordable rental housing from housing corporations on the display and sell it to the highest bidder. He owns it Ministry of Housing abolished and proudly announced that he was the first VVD member to do an entire ministry to disappear.

With the degradation of public housing, there is deliberately created scarcity Causing different groups are played against each other. No, the housing shortage is not coming by status holders! It is not the fault of so-called crooked residents or squatters. Homes are not taken away and made unaffordable by students,

It own home ownership has been stimulated by politics, by homeowners tax benefits (including the mortgage interest deduction). But don't forget the landlord levy where social tenants, the people with the smallest wallet, have more than 3 months(!) of their annual rent in rental tax.

In this way there is dichotomy created between tenants and homeowners (or haves and have nots). It was recently announced that homeowners on average 14x(!) have more savings than tenants. meanwhile rent alleys the past 10 years on average by more than 35%. More than 800,000 tenants have after paying the rent too little money for their livelihood. This is conscious policy.

Housing has not only become more expensive, but also increasingly more temporary. It is estimated that almost the half of the private rental stock leased with a temporary, uncertain, contract. That too is conscious policy.

Several legislation has been enacted that have facilitated temporary renting. In 2010 became the Squatting and Vacancy Act, better known as the Anti-squat law, implemented making squatting illegal. The initiators (VVD, CDA and Christenunie) claimed that this was to prevent vacancy. However, the ban on squatting has not led to less vacancy but well until it criminalizing squatters and a sprawl on anti-squatting companies. For example, the turnover of anti-squat agencies like Camelot and Ad Hoc within has grown tremendously over the years. But also temporary letting based on the Vacancy Act took off. Result: the emergence of a group of disenfranchised tenants to which companies make millions. The homelessness has been since 2010 doubled while more than 100.000 houses are empty.

There is a shift in both social housing and the free sector from fixed to flex. That starts with the introduction of the Campus contract in 2006, allowing students and later also PhD students can rent their room or studio for the duration of their studies. With the introduction Rental Market Flow Act in 2015 the possibilities for temporary letting were further expanded expanded. Landlords can now rent their homes via a wide range of flex contracts temporary rental for the duration of 2, 5, 7 or 10 years without the tenant full to offer rent protection.

In the same year, five-year contracts introduced for special audiences like young people and status holders. A large part of the newly built social rental housing is attributable to this type of housing. The Amsterdam housing corporation The Key even has the wish pronounced to still only to be aimed at temporary youth housing (read: flex lofts).

The excuse used for the increase in temporary rentals was to reduce the flow and to better distribute the scarce housing stock. In practice, this has however, only led to rising rents and housing insecurity among tenants favor of the landlord. Temporary contracts offer the landlord the opportunity to increase the rent after a tenant change. While tenants evicted their house without rights be without replacement housing or relocation allowance. But flexible living is becoming also tax incentive by the government while social rent is taxed. This causes a extra incentive for profit-hungry real estate companies to increasingly focus on temporary and insecure homes. This while the tenants' rights are further eroded and the power relationship between tenant and landlord becomes even more skewed.