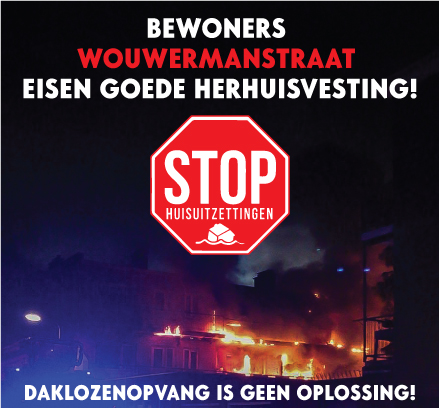 UPDATE – evictions have been prevented and replacement housing has been offered to the affected residents. read more at the bottom of the article.

Lost exactly 4 weeks ago 40 households their home in the Wouwermanstraat in The Hague after a devastating fire. During the first days a lot of help started, people were taken care of in a hotel and after that they could be temporarily housed in Staedion guest houses in Mariahoeve. There was also soon talk of possible emergency declarations for the affected residents. Mayor of Zanen stated:

“We make sure that people have shelter.” – “To these people I want to say: we are here for you.”

We are now 4 weeks further. The media storm has slowly extinguished, and with it the emergency aid. The support promised to the victims by the mayor of Zanen also appears to be short-lived. The emergency declarations that were discussed a few days after the fire have still not been finalized, but the residents did receive a letter last week announcing that their temporary shelter in Mariahoeve will end on June 30. Where should they go next?

"We are being pressured to look for housing for after the 30th, but without the promised urgency declaration, we can only respond to unsuitable housing or we have to move to other cities such as Zoetermeer. Through our social case manager, it was made clear to us, if you don't accept a house before the 30th, the homeless shelter may be a solution."

So much for the help of the municipality. The residents of the guest houses, in some cases older couples who sometimes have a poor command of the Dutch language, have had to sign a document in which they have to agree to their departure from the guest houses, without knowing where to go. In some cases, people have even been referred to homeless shelters if they do not accept a home through Woonnet Haaglanden before the 30th birthday. Meanwhile, the residents are waiting for urgent statements to have a chance at a suitable home

The Bond Precaire Woonvorm (BPW) The Hague assists residents who are at risk of eviction and wants to send a clear signal to the municipality. The overcrowded homeless shelter is not a solution. Forcing residents under pressure to agree to leave their homes and then leave them to their own devices in the current housing market without the promised declaration of urgency is unheard of and is contrary to the support pledge made by the mayor in the first days after the fire. We therefore call on residents to report to us and share their story. This action was kicked off last Tuesday with a flyer campaign in the area where the victims of the fire were temporarily housed. In response to this issue, the Hague City Party requested a 2-minute debate in the city council, in order to clarify the direction of the municipality with regard to replacement, permanent housing for the victims of the fire. The debate will take place on Wednesday 23/06, om 13:30 and under the guidance of BPW The Hague, a number of residents will speak during this debate. 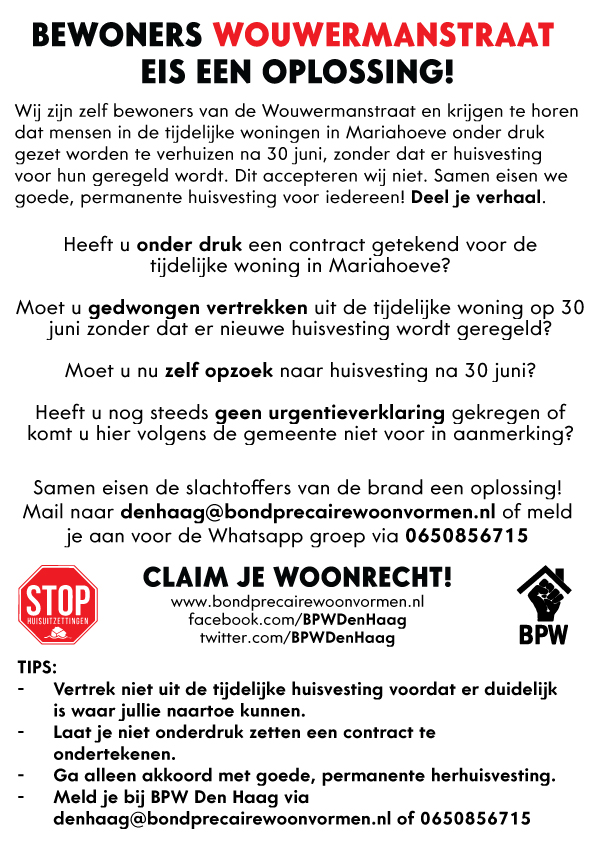 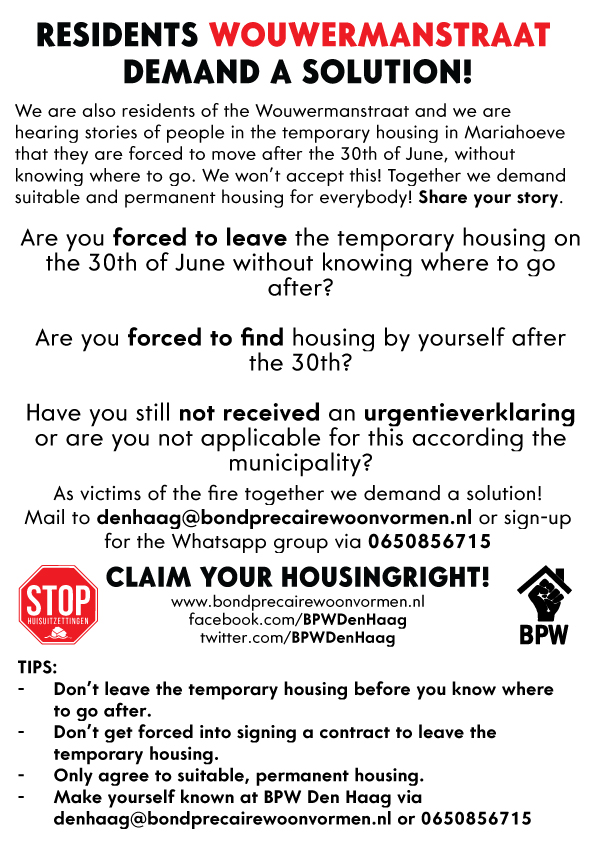 Are you or do you know someone who has been affected by the fire in the Wouwermanstraat and who has no replacement housing after the 30th of June? Please contact BPW The Hague via denhaag@bondprecairewoonvormen.nl, or sign up for the Whatsapp group via 0650856715. The press can also contact the above email address or telephone number for questions.

“We want to give residents the opportunity to organize themselves together and to inform them of their rights and possibilities. These people should not be pressured to leave the temporary housing, but can collectively demand that they only leave the guest houses if suitable, permanent housing is arranged for them.”

BPW The Hague and the residents of the guest houses in Mariahoeve demand:

1. No evictions from the temporary guest houses as long as there is no prospect of permanent, replacement housing.

2. Stop putting pressure on residents to look for housing themselves by suggesting homeless shelters as the only alternative.

3. Arrange the promised emergency declarations as soon as possible for all those affected by the fire. 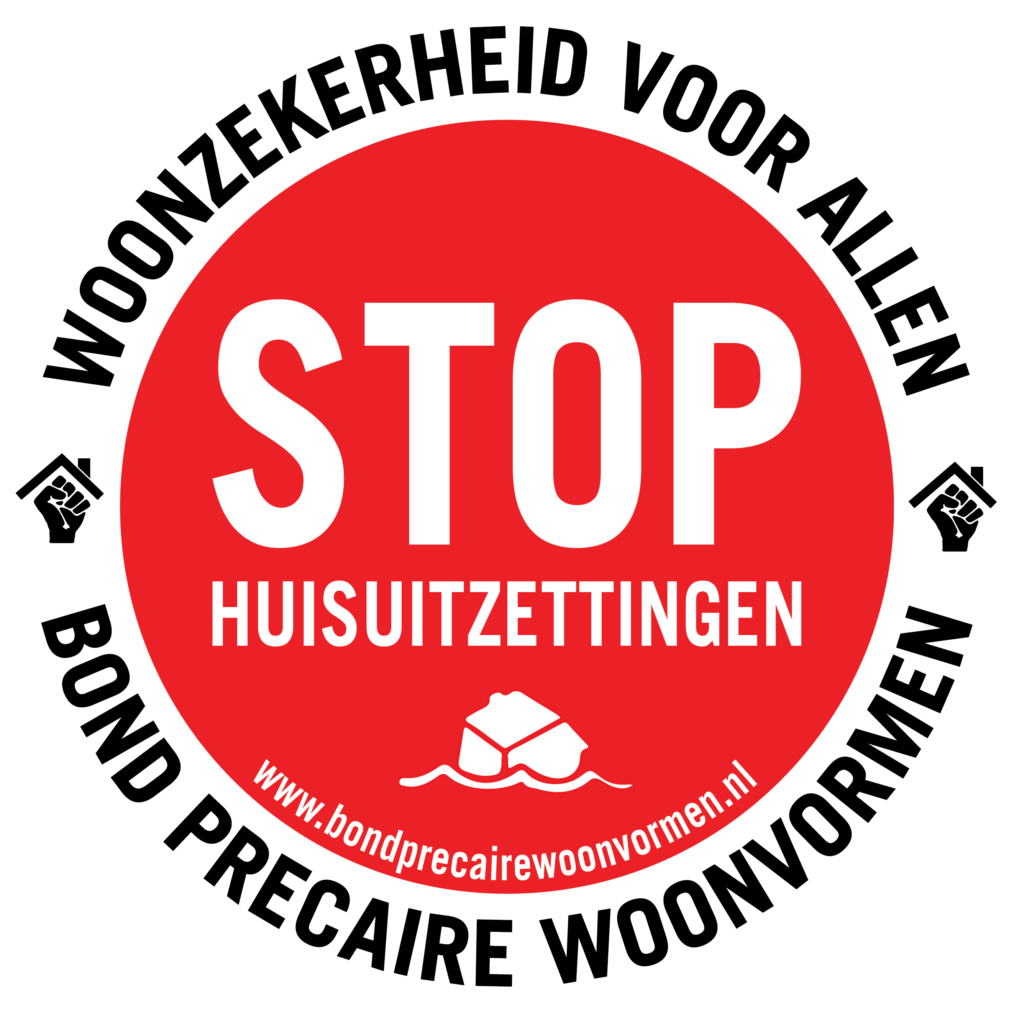 We would like to remind the municipality of their responsibility to ensure that social housing in The Hague is in order. When public housing in a city is not in order and slum landlords are given free rein dangerous situations arisesuch as the fire in Wouwermanstraat. In addition, after a disaster like this, social housing should be able to function as a social safety net. When, after years of political policy, social housing is stripped down to the point that there is no social safety net in emergency situations like this, people end up on the streets if the municipality does not take responsibility for this. We emphasize that none of the victims of the fire are to blame for the fact that their home has completely burned out, nor can they be held responsible for finding a new home in the current housing market, given the socio-economic status of many of these residents. . We therefore assume that the municipality of The Hague can quickly provide more clarity to the residents of the Wouwermanstraat and will not proceed to evacuate the temporary guest houses until it is clear where these people can go.

Under pressure from the BPW, residents and the media, the municipality has scheduled an extra information evening on June 23 to inform residents. Here, a week before the planned evictions of 1 July, they were told that they only had to leave the temporary accommodation if replacement accommodation had been found for them. During this information evening, the residents first got an insight into what was decided behind the scenes about them in the weeks before. Residents rightly complained that they were not included in the decision-making process about their situation and had to live with the prospect of imminent evictions for too long. The responsible alderman continues to insist that the referrals to the homeless shelter were only 'rumours' and thus dismisses the experiences and stress of the residents.

During the information evening and in the media, Alderman Balster communicated that suitable housing had been found for everyone, and that everyone would receive an offer within a few days. In practice, some residents still had to search for suitable housing for a few weeks. In the meantime, all affected residents have been offered social rental housing and most have been well helped with this.

Applying pressure with the BPW helps! Together with the BPW, the municipality and the responsible alderman, residents have called to account and demanded clarity and participation. Extra speed has been made in finding replacement accommodation and unnecessary stress among residents has been removed. Do you also want to take action with the BPW? Become a member!