Bond Precaire Woonvorm Den Bosch supports the residents' group in the Vliertstraat with its struggle for housing security. Recently, an unannounced fire safety inspection found cannabis and clipping waste from 4 outdoor plants for personal use. The municipality of 's-Hertogenbosch, also owner, wants to close the building for 3 months as of March 23. This makes six people homeless for 4?! outdoor plants, this is completely inhumane and disproportionate. We now demand housing security for all residents and that Mayor Mikkers does not abuse the Damocles Act.

Come to the demands handover!

One of the residents received 5 cannabis seeds from a friend last spring. He then planted this outside in a polder near 's-Hertogenbosch. In the autumn he dried the tops of 4 cannabis plants in a drying rack in his own room. The unusable and wet clipping waste was stored in a bag. Ultimately it concerned 2660 grams including cutting waste. No one was in danger because of this. It did not cost any illegal electricity. The few hundred grams of weed were purely for personal use. Precisely for medicinal purposes to be able to sleep better in the coming year. As a result, the resident with a low income did not have to go to the coffee shop to get expensive weed of questionable quality.

There is a tolerance policy in the Netherlands for up to 5 plants and criminal prosecution is often not pursued. However, the police often removed plants from the garden. However, you can be evicted for this on the basis of administrative law and that is exactly how you are punished here.

The vulnerable residents are the victims

Resident Bertus: “Dear mayor do you think it is fair to sentence me to eviction without having committed a criminal offence? If necessary, prosecute me or give us a warning. But don't kick me out of my house. This is a medieval form of pillory and corporal punishment. We also deserve housing security.”

Resident Dave: I'll be in big trouble if I lose my house and become homeless. I haven't done anything wrong. I have been registered for years and on the waiting list for a home. I am not yet eligible if I have a negative landlord statement. This is how me and my roommates get completely stuck. Dozens of residents of Den Bosch have lived in this house to independently solve their housing crisis and offer artists opportunities to develop. It would be a shame if it was now vacated without urgent interest and this possibility disappears. The waiting lists in Den Bosch are immense.”

The Bossche Greens asked questions about the planned closure of the building in the council meeting of 27 February (see Appendix). However, these have still not been answered. Despite the many objections raised against the course of events, Mayor Mikkers recently announced that he still wants to continue the closure of the building. An objection is now being lodged against this and an urgent procedure against the eviction has been started.

Mayors are increasingly going out of their way with the Damocles law. Michelle Bruijn obtained her PhD on cannabis policy at the University of Groningen. Her research showed that mayors at 30 percent of evictions were proven wrong. The BPW is outraged that mayors are acting like sheriffs and are increasingly robbing people of their living space on the basis of administrative law. Especially now that 5 residents, who have nothing to do with it at all, also threaten to become the victims, this eviction in the middle of the housing and corona crisis is completely unjustified, inhuman and disproportionate.

Residents and BPW demand from the municipality of 's-Hertogenbosch and mayor Mikkers:

1. Stop the evictions on the Vlierstraat.

2. Provides housing security for all residents.

3. Stop Abuse of the Damocles Law.

How can you help?

Be welcome Friday, March 26, 11:30 on the demands handing over to the mayor and councilors. Location: City Hall, Market 1 in Den Bosch. Bring protest signs and stick to the corona measures.

UPDATE: The eviction of the Vlierstraat in Den Bosch will not take place next Tuesday, March 23. The municipality of Den Bosch first awaits the appeal of our administrative lawyers. It is still unclear when this will be.

UPDATE 25 MARCH: Municipality of Den Bosch prevents freedom of association and solidarity when demands are handed over from residents of Vliertstraat to Mayor Mikkers.

BPW Den Bosch has been prevented by the 'Enforcement and Public Order' department of the municipality from addressing solidarity tenants during the handing over requirements, for which an agreement has been made with the mayor. Some victims of housing insecurity wanted to briefly share their story in front of the City Hall on March 26 at 11:30 am. They also wanted to make their demands known to council members. This would normally take place prior to the handing over to the Mayor at 12:00, but is now made impossible.

Also, no protest signs can be displayed. Since the municipality has banned demonstrating in the center in the context of corona and refers to a location elsewhere. Of course, a small demand handover with some solidarity sympathizers, in accordance with the corona measures, is very different from a demonstration. “An appointment has been made with the mayor. The appointment made with councilors in front of the City Hall must also now be cancelled. It is therefore disproportionate to disrupt this democratic process in this way. It actively tries to make solidarity between city dwellers impossible, by unnecessarily restricting the freedom of association and demonstration.” BPW Den Bosch thinks that is a bad thing.

You are therefore very welcome on the market, but you are not allowed to gather as a group or unite on the street, according to the 'Order and Safety' department of the municipality. So come and eat some fries at the market… Or encourage the residents in another way. We will keep you informed of the mayor's response to the handover requirements that will continue. We demand:1. Stop the evictions on the Vlierstraat.2. Provides housing security for all residents.3. Stop Abuse of the Damocles Law.To be continued. 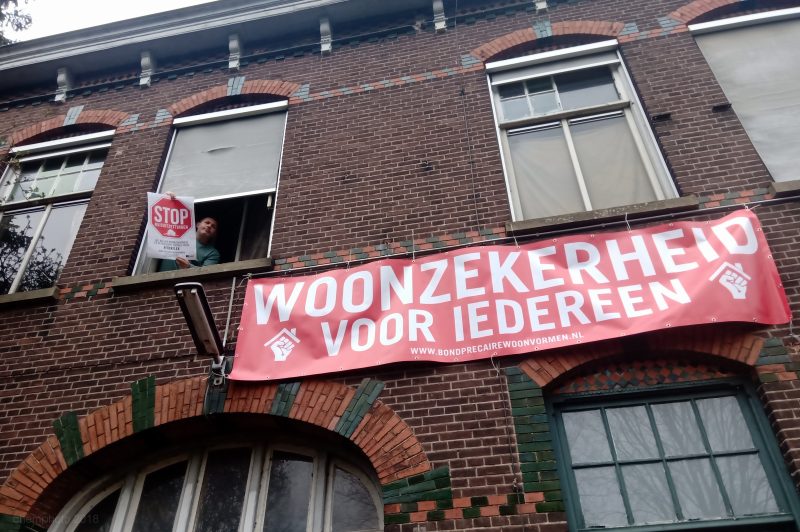