February 18: Residents of Rotterdam Tweebosbuurt in action against evictions by Vestia and Alvast

Rotterdam – The faltering housing corporation Vestia and property management company Alvast are once again threatening to evict dozens of Rotterdam flex tenants from 1 March. Vestia wants to demolish more than five hundred social rental homes in the Tweebosbuurt and build more expensive homes in its place. Vestia wants to be able to start demolishing with the evictions announced before 1 March, while Alvast is still placing new temporary tenants in vacant houses. In addition, there are still all kinds of proceedings against the demolition of the neighborhood and the displacement of its residents.

That is why BPW Rotterdam is organizing a handover of demands on Thursday 18 February at the Vestia head office together with residents of the Tweebosbuurt. Come to the action, share the Facebook event and this article and use #stophuisuit Uitzettweebosbuurt if you want to show solidarity with the residents!

Many of the residents who are now being forced to move have no place to go. Never before has it been so difficult to find an affordable home in Rotterdam. Many do not qualify for social housing in time, as a result of which they are more or less forced to adapt to temporary, insecure or too expensive living situations. Meanwhile, the urgent advice of the government is to stay at home as much as possible and to quarantine if necessary. Protecting ourselves and others in a health crisis has become a top societal priority. Residents' group Tweebos has meanwhile organized itself with BPW Rotterdam and is now demanding housing security for all tense tenants.

"The threat of losing your home is super stressful, because Alvast has no other home available for me. But then again, I can't accept that I and more people will be made homeless, here in my neighborhood. The need is still here none at all." “Moving during a corona crisis with lockdown and curfew is impossible. First: where to? And if you were to get a replacement home, how would such a move go without the help of a group of people? The financial situation of many tenants is dire. We do not have the luxury of moving to another house”

Regular tenant Mustapha resisting the demolition of his neighborhood:

“A lawsuit against the termination of regular rental contracts is still pending. Residents therefore see no reason whatsoever for the eviction of temporary tenants and anti-squat residents before a decision has been made. Demolishing houses for a bare plain in the district, while making people homeless, is bad for the quality of life in this city. And there is no urgent interest”

How do you go into quarantine when you no longer have a home?

Residents' group Tweebos recently wrote a letter to Mayor Aboutaleb (see Appendix 1) to prevent the imminent evictions. There has still not been a response to this. Residents feel left out in the cold: “It's a shame that we are ignored as citizens of Rotterdam,” says Sergio.

DENK also submitted a motion to stop the evictions of temporary tenants (see appendix 2). However, this was rejected.

“The government calls out 'take care of each other during the corona crisis', but this is very cynical if they themselves participate in evictions. There is also no postponement, which is inhumane. It cannot be the case that Rotterdam politics literally contributes to even more homelessness of many young Rotterdammers. We are in the middle of a housing and corona crisis. We do not agree with this. A city cannot explain away its citizens. We will therefore invoke our tenancy rights and fight for our housing security.”

Residents' group Tweebos and BPW therefore demand from Vestia, Alvast and the government/municipality of Rotterdam:

1. Stop the evictions in the Tweebosbuurt

2. Provides housing security for everyone and prevents homelessness

The evictions in the Tweebosbuurt do not just happen. They are the result of political choices. Many residents are threatened with this, which means they always have to take action. Incumbent residents are also bullied to change the composition of the population.

But the objection to the demolition is ongoing still. “We regular tenants declare our solidarity with the temporary tenants. We know that they are also in a bind and only together can we make progress in this city”. In the midst of the housing and corona crisis, without any urgent interest, putting people on the street without rights is completely unacceptable.

How can you help?

In accordance with the corona measures, we keep 1,5 meters away. And don't forget to bring your mouth cap. For those who do not have a mouth cap, BPW will provide it on site. In addition to the submission of requirements to Vestia, there are short speeches. By simply coming to the action you are already a great support, but if you have the opportunity to make a banner or protest sign: have fun! Together we provide a powerful sound against failing housing policy.

Last Saturday we received a call from a former resident whose daughter lives in the Tweebosbuurt with a temporary lease. He is deeply concerned about the letter she and other temporary tenants have received informing them that they must move out of their homes in a few weeks. This decision by the municipality of Rotterdam and Vestia has surprised us enormously, as there is no reason to start demolishing our neighborhood yet. There are still people living everywhere with a permanent lease. There is therefore no urgent interest in terminating the lease of these people in haste.

At a time when the government is calling on everyone to stay at home and unnecessary travel is strongly discouraged, these people only have a few weeks to find another roof over their heads. The government has also determined that evictions are not allowed during the Corona crisis. After all, it is not possible to keep a distance of 1.5 meters during a move and people are not allowed to receive more than one person at home. In addition, there is now a curfew, which makes it much more difficult to move. The cabinet has also indicated to extend temporary leases, and the opposite is now happening in Rotterdam. In the midst of a pandemic, the leases of these residents are now being canceled unnecessarily. In short; Terminating the temporary lease contracts goes against all government rules and advice.

The health of these residents is at risk during a move and is certainly at risk if they end up on the street. Such a thing should not happen in a rich and prosperous country and a city like Rotterdam. Public health must come first in these difficult times.

These residents are important to us. They help some elderly residents with shopping. They chat with the older residents and thus unnoticed fight against the loneliness of our residents. Especially given the special circumstances in which older residents now have to live, loneliness has become a major problem.

We therefore make a moral appeal to you! Please don't put these people on the street. The human dimension has often already disappeared, but let's not make matters worse together. We ask you to take action quickly to prevent these tenants from having to leave their homes unnecessarily.

We hope that you and your environment remain safe and that we jointly grant this safety to our temporary residents.

We would like to thank you in advance for your help! 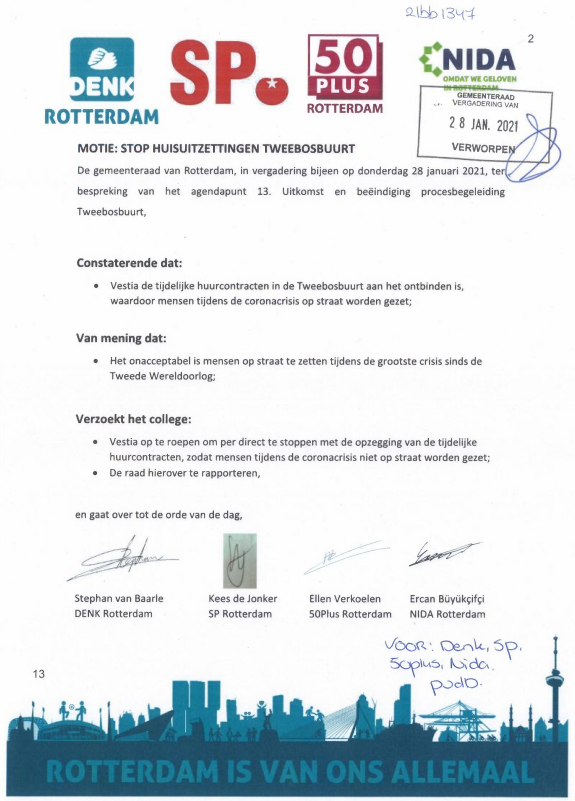