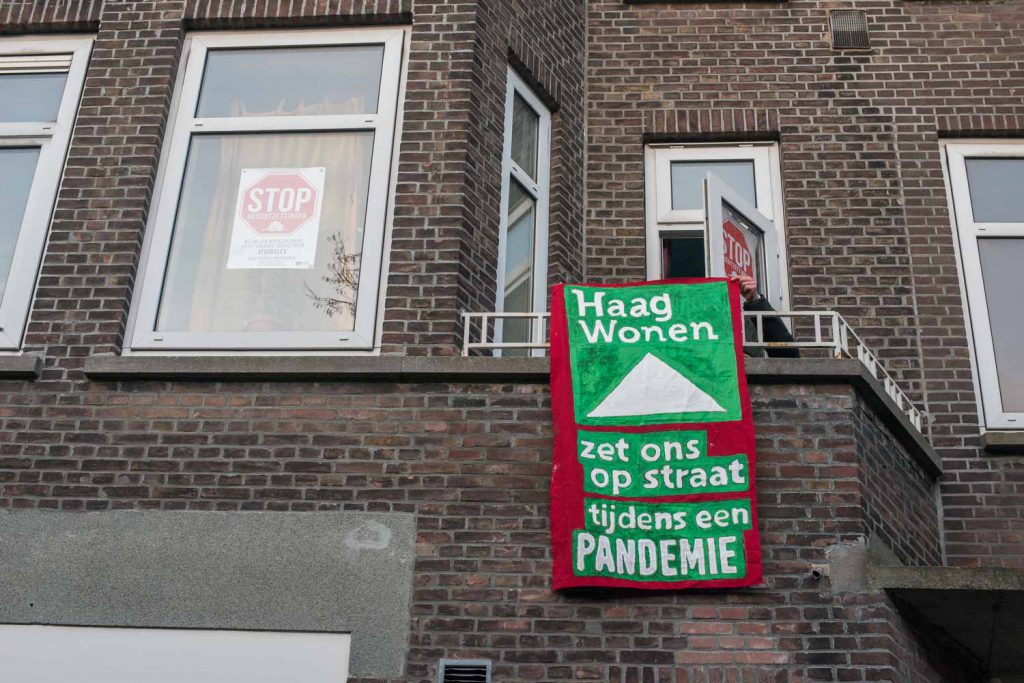 A residential group in the Pletterijstraat in The Hague will be on the street from 1 February. At least, if it is up to housing corporation Haag Wonen. The Pletterijstraat 136 building had been empty for 3 years, when a young group of urgent home seekers moved into it in September 2020. Plans or no plans, they have to get out of there now, says Haag Wonen.

In an email exchange and telephone conversation with BPW The Hague, Haag Wonen made it clear again yesterday that they do not intend to deviate from their ultimatum, even though they are aware that their demand will result in homelessness. Since the corona pandemic, agreements have been made at national and municipal level to guarantee that no one ends up on the street, so that everyone can protect themselves and others by going into quarantine. In practice, people are still made homeless in the Netherlands. Do you also think that this should stop immediately? Read below what you can do!

The squatters in the Pletterijstraat — Liza, Raymond, Andrea and Bram — look homely. Squatter Liza: ''Look, we got this professional stainless steel stove from a neighbor, really a beast!'' They make good use of it, but for how long? In less than 2 weeks they have to leave their homes, but where to; nobody knows. ''We can't go anywhere, they don't even have room at the emergency shelter. We are all on the waiting list, but there are simply no affordable homes available." In The Hague we now have to take into account a waiting period of 6 to 7 years. ''Meanwhile, Haag Wonen leaves perfectly habitable buildings vacant for years to come. Because we have no other options, we saw no other option but to squat this property."

"We do not see squatting as an end goal, but as a means of living."

Due to the housing crisis and the economic consequences of the pandemic, squatting is a necessity for more and more people, also in the Netherlands, where the VVD & CDA recently introduced a law that should make it possible to evict squats quickly. When Liza and her roommates squatted the building in Pletterijstraat, they wrote to Haag Wonen: ''As far as we know, the building has been empty for quite some time and there are no immediate plans for it. Invoking the constitutional and treaty protected home right, we assume that the house can be used by us until you have concrete and executable plans for the building." In response, Haag Wonen asked the residents to rent the building the same month. leave. The squatters then asked in vain for an argumentation for the long-term vacancy of the house and for clarification about the possible existence of plans that made their departure exactly necessary. At the beginning of October, the residential group proposed to agree on a reasonable departure date: ''We asked for 6 months of moving time. 'Too long and unreasonable', Haag Wonen replied; '1 month should be more than enough to find another home,' wrote the management consultant. That is very strange, because in the same e-mail he wrote that people often have to be on a waiting list for a home for years. Haag Wonen then threatened that if we had not found another home before December 1, 2020, they would file a lawsuit against us. Fortunately that didn't happen."

In the meantime, Haag Wonen had informed the residential group by e-mail that the building had been vacant for so long due to plans to sell it, but that they now prefer to rent it out. Because new housing was still not within reach, the residential group then proposed to conclude a rental contract, so that they could continue to occupy the property and Haag Wonen would rent it out again as a regular rental home. Liza: ''That would be a direct solution for us, but also a win-win situation for Haag Wonen, which does not benefit from the vacancy of the building, and ultimately says that they want to rent out the building." Although the squatters are constantly communicating and have prepared accomodating, Haag Wonen continues to demand their early departure and does not want to discuss a rental contact. 'Excluded', reports the management consultant of Haag Wonen by e-mail. "That would not be according to the rules that apply here in the region." At the question of Liza and her living group; whether it is according to the rules that housing corporations in The Hague leave perfectly habitable houses empty in the middle of a housing crisis, there is no answer. Instead, the management consultant of Haag Wonen points to the existence of the 'closely structured housing distribution system that we have in the Netherlands, in which everyone automatically gets their turn'. In the same e-mail, Haag Wonen states that entering into a rental contract would be unfair to everyone else on the waiting list, playing on feelings of envy that some feel when they hear of legalization processes around squatted housing — as happened regularly in the past and to which we also owe a lot of affordable living space in The Hague. The statement that offering a rental contract would be unfair is incorrect, because the property was withdrawn from the social housing stock years ago with a view to sale and has therefore not been offered on the housing market for a long time.

The fact that a social housing foundation like Hague Living, with the social core task of realizing sufficient and good public housing, leaving perfectly habitable houses empty for years, is more a cause for discussion as far as BPW The Hague is concerned. In the case of Pletterijstraat, it would be more appropriate to pay the current residents a finder's fee than to insinuate that, by being allowed to stay there, they would outpace other house hunters. After all, if we were to open up the vacancy at rental companies en masse tomorrow, the waiting time for an affordable home would be reduced for everyone. We believe that especially in this uncertain period, leniency and a solution-oriented attitude can be expected from Haag Wonen — homelessness is of course not a solution. Government and landlords must recognize that we should no longer view homelessness as an individual crisis situation, but as a growing social problem, arising from political policy. On top of the housing crisis — with a doubling of the number of homeless people in 10 years — the corona crisis has therefore come from last year, making the guarantee of a safe home a top social priority. Continuing to push for forced relocations and evictions goes against the government's urgent advice to stay at home as much as possible.

During corona everyone shelter

As a result, in March 2020 signed a letter of intent, between Minister Ollongren (BZK), the VNG, the landlord organizations and industry associations Aedes, IVBN, Kences and Vastgoed Belang. The central message: during the corona pandemic, no more vulnerable people will end up on the streets. Unfortunately, nothing turned out to be less true. Even during the lockdown, BPW still receives new reports every week from residents who are at risk of being kicked out by their landlord. In The Hague, several (flex) tenants have managed to prevent their certain homelessness during corona by organizing themselves together with BPW, but unfortunately that is only the tip of the iceberg. As a result of various actions, to which, in addition to BPW members, sympathizers from the municipal council (HSP/SP) participated and SP MP Beckerman spoke speech, were councilors room questions put. In The Hague, the motion was recentlyStop evictions of tenants during hard corona lockdown', whereas 'Due to the hard lockdown and other corona measures, many people are losing their income and are incurring rent arrears with major consequences''; ''Having no home means you can't quarantine […]'' and ''It must be prevented that more people become homeless.'' These considerations apply equally to squatters, anti-squatters and temporary tenants — whether or not more, if we were to assume that people in temporary housing situations as a vulnerable target group should enjoy extra protection right now: it is precisely in a pandemic that we should not deny anyone the right to protect themselves and others.

Haag Wonen is now considering evicting Liza and her housemates through legal proceedings. Liza: ''I'm tired of constantly being forced to move and having to keep looking for new places to stay — I just want to live in.'' The residential group shows a whole list of vacant Haag Wonen properties. ''Rather than having to squat a house to avoid having to sleep on the street, I would see Haag Wonen simply renting out its properties for people who don't have much money. During the housing crisis, every unused home is one too many.” Before the home was squatted, neighbors contacted Haag Wonen several times in vain to offer to buy the property — “And then give it to people in acute distress.” to rent out housing. The neighbors are happy that we live here now. And they think that our presence benefits the liveliness and the feeling of safety in the block.” This morning the residential group distributed 250 neighborhood notes to inform the neighborhood of their situation. “In addition to sharing our story, we ask local residents to call or email Haag Wonen. Look: if they scan the QR code at the bottom of the letter, the sample letter to Haag Wonen will appear on their phone."

What can you do?

Participate in the Haag Wonen call action! Call this Monday from 09:00 to 070-250-7070. You can also e-mail to info@haagwonen.nl. Let Haag Wonen know that you do not agree that the residents of Pletterijstraat 136 are forced to give up their living space as of 1 February under pressure from a lawsuit. Request a postponement of departure; re-housing; a rental contract. You can also support via social media:

Want to stay informed of follow-up actions? Follow BPW The Hague Twitter and Facebook.
Would you like more information about this campaign? Send an email to lizaraaymakers@outlook.com or denhaag@bondprecairewoonvorm.nl. And read the open letter from the residents below!