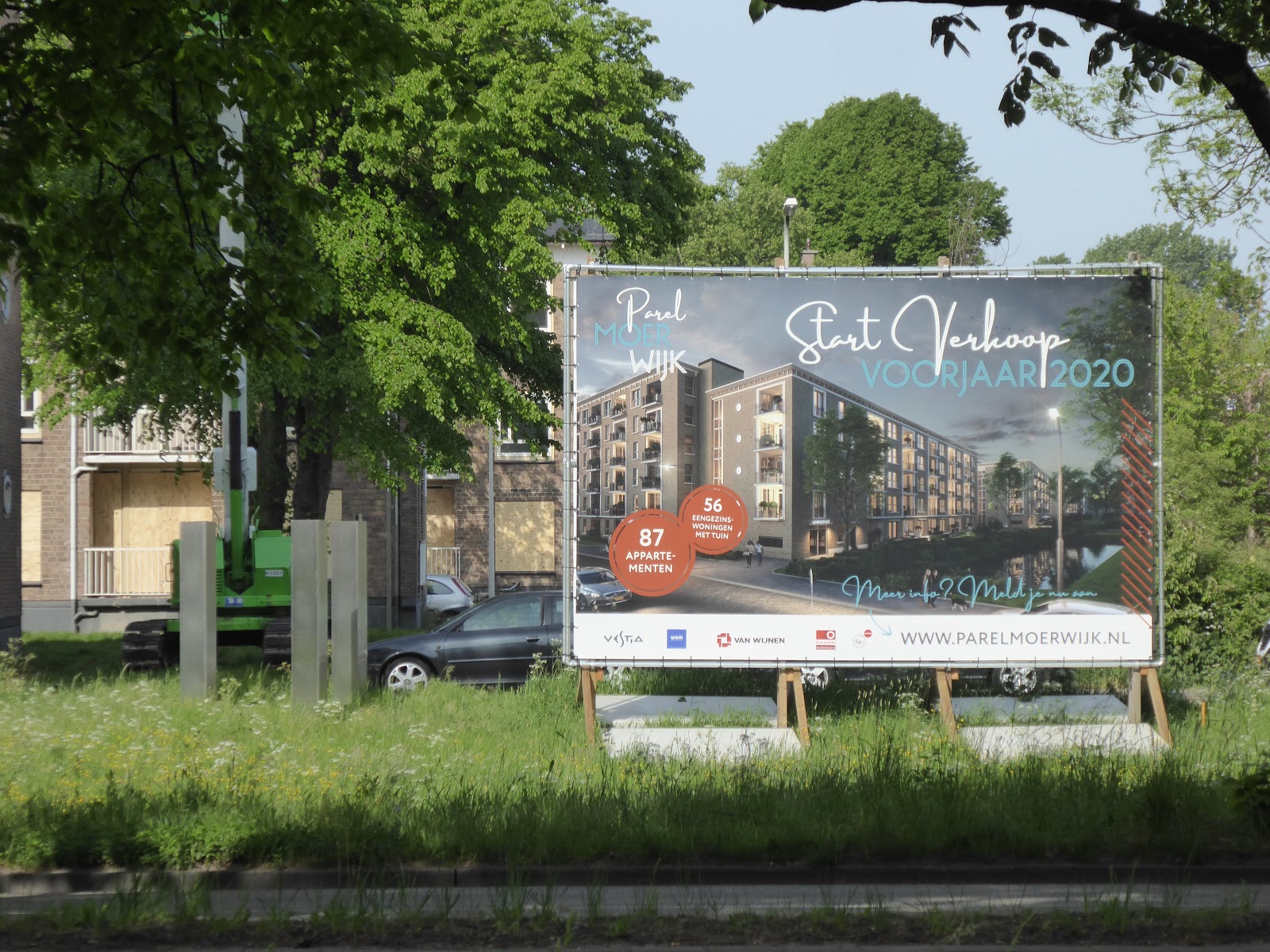 The contrast between the new 'Pearl Moerwijk' billboard and the boarded-up ghost neighborhood couldn't be greater.

Moerwijk, a real residential area in The Hague, will cease to exist. At least, if it is up to project developer WOM Den Haag Southwest. She will soon be touted as "Pearl Moerwijk'. With this ostentatious name change, the rebrand to a luxurious residential area complete. Here we provide insight into how the gentrification process is unfolding in Moerwijk and why this is harmful to the original inhabitants of the district.

There were already plans in 2002 for the restructuring of Moerwijk-Oost, but partly due to the economic crisis in 2008 and the very bad financial situation housing corporation Vestia was in, major investments in the district were not made for years — until the end of 2017 in the new area reconnaissance parts of the neighborhood were labeled as ready for demolition. It Social Status obliges housing associations to inform residents of demolition or renovation work at the earliest possible stage. according to neighborhood survey of the SP Eighteen months later, few residents are fully aware of what is about to happen. In practice, Vestia therefore does not give priority to this.

The process of gentrification is tearing apart families and close-knit neighborhood communities with high-quality social connections, forcing them to relocate to other outskirts of the city or beyond, putting further pressure on the social housing stock, with an estimated shortage of 315,000 . The chance that they will ever be able to rent a house for the price of their former rental house is virtually impossible. And that of course has disastrous consequences for a large group of residents of a neighborhood known as one of the poorest neighbourhoods from The Netherlands.

In addition to social tenants and private tenants, the 30 small businesses in the old barracks building have also become victims of the large-scale new construction plans. These companies, which together guarantee 100 jobs for, among other things, low-skilled staff, must leave on 1 July 2020 to make way for 4 residential towers with a total of 542 homes, of which only 144 would be social rent (note 1). 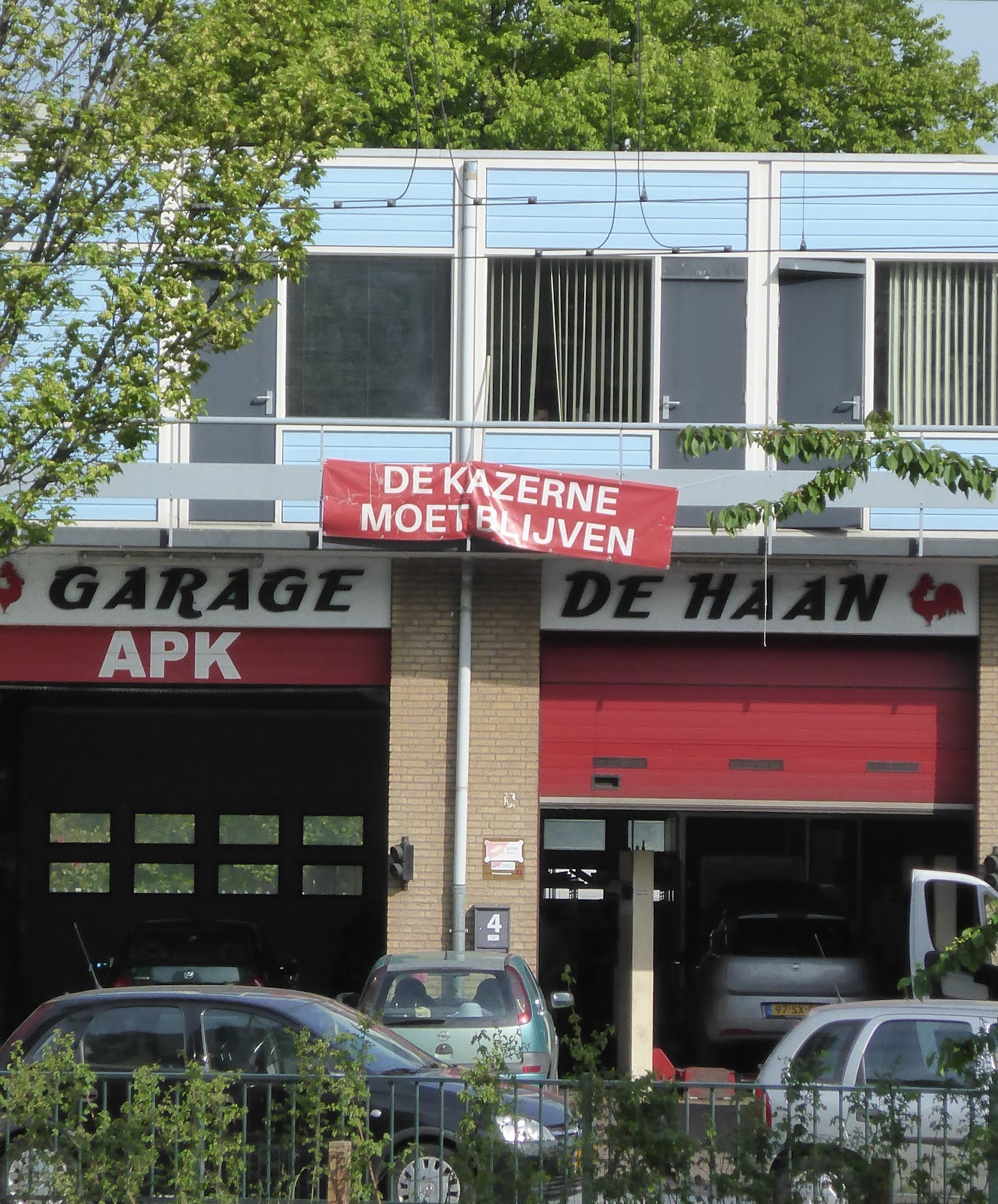 Banner: 'THE BARS MUST STAY'

In the next step of the process, long before the actual demolition date, leases are terminated and tenants who enjoy tenancy protection are replaced by anti-squat tenants, facilitated by anti-squat companies with a strong profit motive — Ad Hoc in this case. By using anti-squat, Vestia does not even respect the minimum rental rights for temporary occupancy that the Vacancy Act offers. Their advantage in depositing a group of anti-squat tenants in a demolition building at an early stage is that the vacant buildings are promoted from a cost item to a revenue model and that these temporary residents ensure that the buildings cannot be occupied by squatters, who in turn would have to be driven out through expensive eviction procedures. In addition, anti-squat tenants only need to be notified of their departure 4 weeks before demolition — and let the latter be exactly the case. On April 1, 2020, Ad Hoc residents were told to give up their housing in mid-May amid a global health crisis. Because it is unacceptable to force people to move in times of corona, BPW The Hague came together with anti-squat tenants of 3 demolition flats in resistance. The Hague City Party (HSP) suggested advice questions and the eviction was postponed to July 1. Vestia's empty promises and Ad Hoc, it turns out later, when the residents are urgently requested to leave as of 1 June in mid-May.

The anti-squat tenants have not yet half left when the marketing concept before the new Moerwijk is rolled out. While the boarded-up ghost district is still standing on the spot where the new 'Pearl Moerwijk' is to be built, the first luxury owner-occupied apartments are already going up for sale. For the smallest 2- and 3-room apartments there is an asking price of between €225,000 and €300,000 — an amount that the former residents of Moerwijk, with an average income of €16,400 per year (note 2), are by no means eligible.

“Brand new living in the existing city, in a house with the character of the past.” — Whereas the character of the houses before demolition was mainly characterized by overdue maintenance, an image is now sketched with artificial melancholy that is intended to attract new residents.

In the case of newly built or renovated social housing, housing associations are obliged to offer the original residents the opportunity to return, by means of a priority arrangement. However, the plans for 'Parel Moerwijk' show that tenants do not even have to count on rehousing within the district. Many new homes may be added, but for whom? Where the current percentage of social rent in the neighborhood is between 70% and 80%, in the new plans it drops towards 35% (note 3). Residents of social rental housing with an income that has risen just above the income limit over the years must meet this limit again with a new contract, and can thus lose their right to social rental housing (note 4). For low-income residents there are major concerns about the introduction of the Rotterdam law, of which Groep de Mos is a proponent. This law states that people with a low income can be banned from certain neighborhoods, in order to improve the 'liveability'. In the Living agenda 2019-2023 of the municipality of The Hague, the law specifically applies to 'improve' the situation in Moerwijk. However, research by the UvA shows that the controversial law has no demonstrable positive effects on the quality of life in the neighbourhood, but that it mainly discriminates against immigrants with a low income (note 5). In view of the fact that the current percentage of immigrants in Moerwijk is more than 75%, and the average income is far below the national average (note 6), there is enough reason to believe that returning to the new social housing will be a particularly difficult story for the old Moerwijkers.

Of course, demolition can also offer residents new opportunities. Logically, the urban renewal urgency should provide residents with the opportunity to leave their neglected homes and move into a home where they are less likely to serious health problems to keep. After all, if we are talking about real improvement of the neighbourhood, wouldn't it be most fair and justified if these residents are guaranteed to return to one of the brand new homes in their old neighborhood? After all, they had to live for years in noisy, damp and poorly insulated houses. As long as neoliberal market thinking has its grip on the housing stock, the chance that they will find a newly built social rental home elsewhere in the city will remain negligible. It will therefore continue to mean that residents with an urban renewal urgency will be forced to rely on second-hand homes, which in 10 years' time may have the same defects as their former home.

Conclusion
No resident will dispute that Moerwijk-Oost is due for renovation, but the way in which the gentrification process is putting pressure on Moerwijkers is relentless and reprehensible. By depriving the district of new investments for years, it becomes easy to push through radical new construction and renovation plans, at the expense of the least able-bodied. Rents in Moerwijk are skyrocketing, the social housing stock is being weakened and the neighborhood is being given a new image, which should attract a different type of resident to the neighbourhood. Under the guise of 'Out with the old, in with the new' does the neighborhood development company 'Out with the poor, in with the rich'. Isn't it a shame that planners time and again get away with the short-sighted view that you can only improve a neighborhood once you've chased the original inhabitants away? In Moerwijk-East the resistance comes too late, but for the rest of Moerwijk and for many other Dutch neighborhoods, where municipalities and project developers are already eager to roll out similar plans, hopefully not yet!

With the BPW, residents make a stand against evictions and the breakdown of the right to decent housing. By informing each other and organizing ourselves among ourselves, we are building a strong movement: for a healthy and dignified living environment in which not the power of big money, but affordability and housing security are the leading motives. Do you live in a neighborhood where the first signs of the gentrification process are already noticeable? Join and become a member of the Bond Precaire Woonvorm!