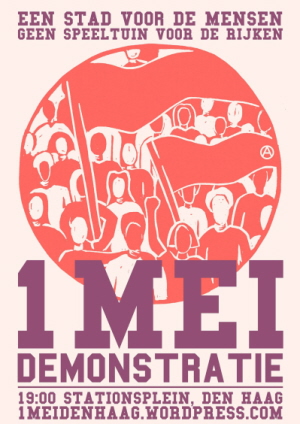 Affordable housing is being demolished en masse to make way for luxury apartments. More and more people can no longer find affordable housing. The city is slowly but surely becoming a place where most people no longer seem to be welcome. While for many the housing situation is becoming increasingly precarious, there is a process going on that all those who do not belong to the wealthy elite are being pushed to the suburbs or even outside the cities," he said. the call for the 1 May demonstration in The Hague “A city for the people. Not a playground for the rich.”

Demonstration
Tuesday 1 May
From 19:00
station square
the Hague
(At The Hague HS)
Facebook

The BPW wholeheartedly supports this May 1 celebration for the right to housing and the city!  Do you think a free and inclusive society is important?

Then come to The Hague in the afternoon. At 14:00 the march for social security starts there organized by Breakthrough BPW and other groups.

The appeal from The Hague continues: “It is a process that works like a silent killer. Neighborhoods and streets are filled with pop-up stores where hip starting entrepreneurs can rent cheaply. This sounds nice, but this only happens to financially upgrade a street or neighborhood. Eventually, if the neighborhood is hip enough, social housing will be demolished to make way for houses that are unaffordable. For example, the current residents are oppressed from their neighbourhood, after which an elitist uniformity remains. Due to this process, also called gentrification, rents rise enormously while people's incomes remain the same. The small shops and socially accessible spaces are also disappearing to make way for expensive and exclusive shops, hotels and cupcake shops. If we don't stop this process, the city will turn into a playground reserved only for the rich. The city is not intended to make unlimited money, but should be a place where residents should be able to feel free and where everyone should be able to develop to the fullest.

The process of gentrification is a textbook example of a system of exploitation that is based only on the interests of the very rich. A capitalist system that puts profit above people. If we want an equal city where everyone has a place, we must fight not only gentrification but also capitalism. That's why we take to the streets on May 1.

May 1 is the international day that people all over the world take to the streets for an equal world without exploitation and capitalism. There will also be a demonstration in The Hague to make us heard against the oppression of people with less money from the city, against the system that exploits us. Because the city belongs to all of us and we have had enough of even more elite construction projects. Come to the demonstration on 1 May in The Hague. We are claiming the city!”

Knowing more? Gentrification what is that?

April 23, 2018: Lecture on gentrification and May 1 at the Royal Academy of Art. Abel Heijkamp will contribute to this lecture on behalf of BPW.