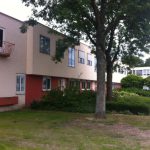 Twenty anti-squat residents in a former mental health clinic in Buitenveldert find it unnecessary that they have to leave a building belonging to the municipality because it wants to place a number of asylum seekers there urgently. Other than media coverage leads us to believe, the students would like to share the building with the asylum seekers instead of 'not happy that they have to make room for the refugees.'

The building at Walborg 2A has enough space for more residents, according to the anti-squat agency Villex, who have only lived there for a few weeks. They submitted a plan to the municipality to share the property with the asylum seekers. Initially, the municipality and the owner of the building (GGZ inGeest) were interested in this, but at the last minute the students rejected the alternative.

In consultation with officials, the anti-squat residents, on the advice of the BPW, devised a plan to redistribute the available spaces in the building so that both students and asylum seekers could live there. GGZ inGeest indicated that it would agree to this if the municipality and Villex also agreed. However, anti-squat agency Villex was not happy to be 'passed over' in this way and pointed to the 'legal risks' of the solution proposed by the students. Later, the municipality reported that more asylum seekers had to be placed in it than they had originally planned.

The result is that the students still have to leave and there is no replacement accommodation available for them from villex, nor from the community. 'This is shifting a social problem', says one of the anti-squat residents. 'The municipality helps people who are homeless to find a house in various ways, but now they are making us homeless to accommodate other homeless people.' Another resident thinks it is rather crooked that there are enough vacant municipal buildings available: 'Why not use one of those unused buildings to help people get a roof over their heads?'

The BPW is sick and tired of people being treated like domestic animals and disenfranchised groups being played off against each other. In Buitenveldert people are again being pushed around because 'legal considerations' are apparently more important than people's right to a roof over their heads.

'Anti-squatting agencies will always hinder social solutions in these kinds of situations; they have no commercial interest in that. But it is time for governments and social institutions such as the municipality of Amsterdam to realize that they should invest in solidarity. The students in Walborg 2A have shown that. Instead of embracing that solidarity, the municipality automatically opts for minimizing its risks', according to Abel Heijkamp of the BPW.

Listen here to the interview about the situation on Amsterdam FM: Students in solidarity with refugees.