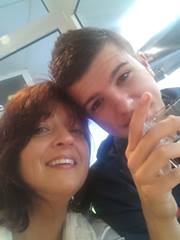 The combative mother (Ismene) and her son (Rowdy) resist an illegal eviction by the dubious anti-squat landlord Villex who recently canceled the contract of 4 of the 8 residents of the old JTC building of the Municipality of Roosendaal because of "open doors". However, residents have not left the doors open at all and are defending themselves against this bizarre eviction ground. For every day that they are not away (after December 17) they are threatened by Villex with a (legally) very dubious fine of 500 euros per day. 3 of the residents have therefore recently packed their things due to these financial threats. “Pure intimidation” states the BPW leaving is not necessary, residents have been advised to hire a lawyer and not agree to this termination. “No one, including temporary residents, may be evicted without a court deportation order, this kind of financial extortion in 2013 in the name of the Municipality of Roosendaal is scandalous. It would be appropriate if the Municipality of Roosendaal immediately terminated the contract and the outsourcing construction with Villex, that it stops circumventing the rent protection and the vacancy law and, as a social and responsible owner, starts arranging the rental itself.”

According to residents, the local responsible for this construction at the Municipality says that they are not responsible for Villex's actions, and that they have discussed the postponement until sometime after Christmas, but Ismene and Rowdy do not agree. "We haven't done anything wrong by leaving, if we admit it, we'll pass." Precarious tenant Rowdy pays 235 euros "loan fee" incl. per month, the heating of the building does not even work. Ismene “We would have preferred to rent a regular room with rent protection. They check for everything in the private sphere, for a guest of 4 days you even have to request written permission. We want to have more rights. But there are hardly any rooms to be found in Roosendaal, just like in Rotterdam where my son studies, yet we are not giving up on this house just like that”.

It is not the first time that outsourcing to anti-squat companies such as Villex has led to scandalous and lawless practices. The municipality of Roosendaal should therefore simply house people on rental contracts instead of outsourcing to dubious companies such as Villex that work with “loan contracts” (read disguised lease) and try to circumvent all tenancy rights and the vacancy law. ROWDY STAYS!

Read the letter below the Letter from Ismene the mother of Rowdy.

SHAME!!!Municipality of Roosendaal VILLEX is a terrible property protector of the old JTC!

Folks dear I've never seen such incredibly weird heartless people. Rowdy my son of just 19 years old was allowed to rent a temporary space in the old JTC at the Bovendonk 1 in Roosendaal. Normally people will not easily hear me speak evil, but now I am so angry. I also know the other mothers, one of them is my neighbor and they all have the same because 4 boys have to get out with the reason that the doors have been left open but there is no evidence against Rowdy. We are all terribly overwhelmed he went to live there in October. His first place to really stand on his own two feet from there, perhaps in Rotterdam he is at the Grafisch Lyceum and things are going really well with nice points. But there in Rotterdam it is very difficult to find something and terribly expensive! But this was a really nice temporary solution still in the vicinity of family and friends. So they go my son and the 4 other boys per axle. Tuesday and if he doesn't get out he will be fined this just before Christmas and without any proof of anything just empty allegations. Apparently the doors would have remained open a number of times, but Rowdy is not personally accused of this, there is no evidence of just a whole group of young people. I have also tried to contact Rowdy with VILLEX to talk about this and we have also been polite through e-mail traffic. We also stated in a notice of objection that we would like to receive evidence. But apparently there is only a stiff attitude and they continue to stand their ground!!! I don't know who knows my son but we just made a cozy place and he was super proud. I am very sad that we are not listened to as a person by such a stiff company. Who puts someone on the street for Christmas and that within three weeks when you know that it is practically impossible to find something as if they are criminals and you have just paid the rent. And then there is also the threat that the costs will continue to be added. Like we get money back from them where it's always your word against theirs. ...yes he has been without heating for 3 months and no internet, resulting in a hefty bill on his mobile. His key was also given to someone else of the inmates without his permission and he could just enter. Temporary living is therefore a
terrible way of renting you can't do anything Rowdy even had to call if someone stayed over. Nice when you have a girlfriend to spare! Of course your mother will stay and there will be a room, but that is not my point it is about the injustice in temporary housing ... in other words anti-squatting with the housing shortage that now prevails, the person is not at all
single front protected. Also take a look. How much abuse is made of this way and the dependency you are in! It left me with a very bad aftertaste, also with regard to the costs it entailed and the effort and energy and time etc.. Of course he has his room here to be treated like that.

Together with Rowdy I have also contacted the “Bond Preciare Housing Forms” and they say that this is more of a common problem than an exception to story. On their website you also see people now resisting this way of treatment. This must stop, as does the housing shortage for young people and people with a low income who cannot rent and are on a waiting list.

Young people who become vagrants ... can well imagine why that is!