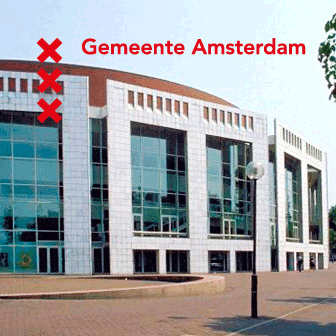 On 4 December, the Amsterdam city council spoke on behalf of the BPW. Reference was made to a number of problematic matters in a model loan agreement (see: http://zoeken.amsterdam.raadsinformatie.nl/cgi-bin/agenda.cgi/action=view/id=2753
) that the municipality wants the housing associations to use. The councilors then asked alderman Ossel questions about involving residents' organizations in drawing up a model agreement. It was also asked whether the basic rent (excluding service costs and energy costs) could actually be set to zero. See below for the speech text:

The nationally active Bond Precaire Woonvorm has been providing first-line help with issues between borrowers and anti-squat agencies for three years now. The loan agreement plays a central role in this.

Jurisprudence on this subject increasingly takes into account the fundamental rights of the resident. It may have taken a while. A quick glance shows that the advocacy of this group naturally lags far behind that of the real estate interest. The complaints of these residents rarely reach the public domain, not least because the anti-squat agencies, now monstrous companies, invest disproportionately a lot in their legal department.

In a very recent example, the Court of Amsterdam on 19 November issued a judgment in the Parooldriehoek case against Anti kraken BV, a company with, remarkably enough, at the time both a Housing and Room Mediation license from the municipality and also provided with the Leegstands Beheer quality mark, but about that. more later. Antiraak BV charged 150-160 euros per month. This was exclusive of taxes and energy. This 150-160 euros is now regarded as a rent, because it could not be justified in any other way than as rent.

The documents for today include a draft model agreement for vacancy management for housing association homes. An amount of 220 euros all-in is mentioned here as the maximum. We use the calculator: in Amsterdam the taxes for a 1-person household are on average (waste: 250 euros, water system 100 euros, purification 50 euros, total 400 euros annually) about 30 euros per month. According to Nibud, energy costs are on average 110 euros per month. Then 80 euros of the 220 euros is still not justified. The model agreement is therefore only a small improvement, because 150-160 euros was not justified at Anti kraken BV. It was of course noticeable that the model does not venture a maximum basic "rental" price.

The question remains what can an anti-squat agency charge? Costs for mediation and management certainly not, because the principle applies that a mediator may not serve two masters. Offering houses in anti-squat is of course a choice of the corporation. No anti-squat homes are offered because residents want it so much. That's not allowed. Mediation costs are therefore for the account of the landlord. Remaining costs may also not include the one-off brokerage and contract costs, which, incidentally, had previously been capped at 26 euros by the Amsterdam Federation of Housing Corporations.

The “services of the vacancy manager” assumed in the model simply have no basis in law. The controversial fee is at most a present at the expense of the resident to the anti-squat agencies that take the coals out of the fire for the corporations. It resembles, unfortunately, the Aedes deal on the landlord levy: The landlords decide, the tenants will pay.

If the municipality now chooses to follow the market model of the Leegstands Beheer quality mark, a lot of misery will be legalized. Instead, a resident model could be set up in further discussions with residents' organizations. The municipality can be a pioneer in this and thus protect this extremely vulnerable group of residents.