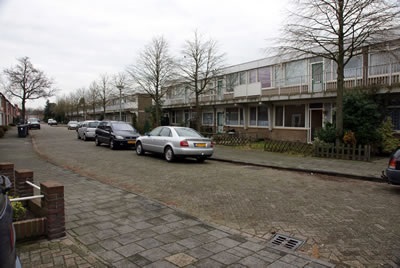 2 residents of housing corporation St.Joseph living at Schild 12 in Boxtel are protesting against the termination of their contract. St.Jozeph has outsourced the management of the house to Camelot through the anti-squat construction.

Camelot property inspectors have entered the private lives of the residents and have taken unsolicited photos of the household. According to the completely arbitrary standards of the anti-squat agency, this one would be too dusty. Which was reason to terminate the contract. Residents dispute this and object to these privacy violations and termination. A landlord has nothing to do with a tenant's living space. Resident Merijn Pel: “I'm in class as a teacher, because of all these kinds of problems I have much less time for my work, I'm really disappointed and it causes a lot of unnecessary stress. It is absurd that St. Joseph is doing business with this company”

Previously, “certified” Camelot has already multiple illegal evictions done, in which many belongings of residents were also destroyed and stolen. Such a scenario is not accepted in this situation. No one, including temporary residents, may be placed on the street without a court order.

Residents no longer accept that St.Jozeph outsources its core task as a housing corporation to dubious anti-squat companies such as Camelot. After all, corporations can rent out (temporarily) themselves.

The BPW has established that it is a national trend among housing corporations to use outsourcing constructions to hire people through all kinds of
deprive flexible contracts of their rights. This is unacceptable, as housing associations are in favor of providing stable accommodation for the growing group of home seekers. The abuses in the field of anti-squat show once again the need for rent protection.

Residents therefore give St.Jozeph the opportunity to rectify this outsourcing error. In the case of temporary vacancy due to demolition or renovation work, a temporary lease does not belong to an anti-squat construction. Many of the tenancy rights do not already apply there and are already very disadvantageous for tenants. For example, there is still no right to compensation for moving expenses and right
on alternative housing. However, the legal position is better protected than in the case of lawless anti-squat. As far as the BPW is concerned, the strangulation contracts that anti-squat agencies draw up, completely outside the Vacancy Act, are a thing of the past. A motion was recently passed on this subject that provides that housing corporation should stop anti-squatting.
We therefore demand that St Joseph's the outsourcing construction with Camelot stops,
withdraws the termination and starts renting out (temporarily) itself.