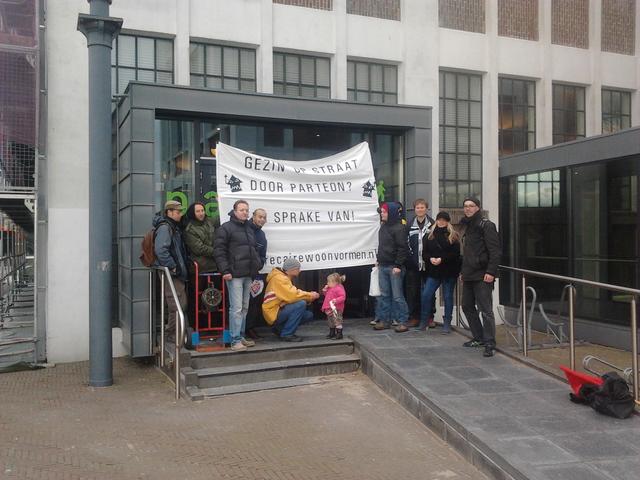 Today members of the Precarious Housing Association (BPW) and friends visited the Parteon housing corporation because there is still no solution for the impending eviction of the mother and her child living at Oostzijde 268b in Zaandam.

Employee Linda Brouwer and director of Housing Rob Meijerink informed the representatives that they had given the house on the East side for 'strategic reasons' to anti-squat bureau / vacancy manager Camelot Beheer BV instead of renting out the house itself. They also let it be known that in their view the housing corporation Parteon has nothing (legally) to do with the residents, since they have a contract with Camelot. In line with this, they noted that the residents had a 'free' choice at the start of the contract whether or not to sign the contract, they knew what they were getting into, according to Parteon, and then they should not complain if it is now is finished. In other words, the choice between having a house or no house is also a choice and if you then pay nicely 200 euros 'rent' per month for 2 years, you should not complain later if you are unceremoniously thrown into the street for strategic reasons..

Parteon ignores the fact that more and more home seekers are confronted with long waiting lists and therefore find themselves in a second-class housing market of temporary and precarious
housing forms. Free choice is often only a limited reality. Parteon continues to evade its social task and responsibility by referring for new housing to the Municipality of Zaanstad and Camelot, the latter states that it does not (re)house children.

However, Brouwer and Meijerink were able to indicate that they wanted to maintain a notice period of 3 months instead of the 4 weeks notice period set by Camelot.

Actually a sad day in which Parteon made it very clear not to fulfill its social responsibility and task as a social housing provider, but to believe in strategic investments and the outsourcing construction with Camelot.

In any case, one thing is clear: if you, as a so-called social housing corporation, go into business with anti-squat agencies/vacancy managers and thus create abuses on the housing market, you will get angry residents on the doorstep. Count on yes!

Read more about the promotion via the links below.

In response to commotion about the building on the East side. Parteon wants to relax anti-squat. Noord-Hollands Dagblad.

Parteon Talk to protesters about temporary occupancy. Message on the Parteon website:

Other media about actions by the BPW regarding the family threatened with eviction.